A little known fact about Houston: It boasts the second-largest Indochinese population in the United States, just behind Los Angeles. The first Chinatown was established east of Downtown, but today the southwest area of the city has emerged as the thriving international district. The neighborhood contains shops, restaurants, and cultural centers that share blocks with Indian, Pakistani, and Middle Eastern markets. The area is more of an “Asia Town” because of the wide diversity of the ethnic groups represented. Houston’s Chinatown stretches east and west of the Intersection of Bellaire Blvd and Beltway 8 (a.k.a. Sam Houston Tollway). While you’re enjoying our Houston furniture rental during your stay in our city we encourage you to check out this rich cultural hub of Houston life. 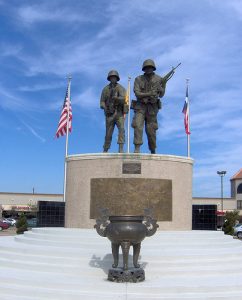 Ocean Palace, the king of dim sum restaurants in Houston, is an absolute must on your list for Houston Chinatown. If you are unfamiliar with dim sum, it is a style of Cantonese food that is prepared as small bite-sized or individualportions and traditionally served in small steamer baskets or on small plates al a carte. It is extremely affordable and also very tasty.  Attending dim sum is a great experience and one that should be shared with a group, as the object is to try as many different dishes as you possibly can.

How about a relaxing foot massage at JL Luxurious Foot Spa? You can get a foot massage for $20 that is 60 minutes long. The process includes a foot soak followed by a thorough massage of your head, shoulders, arm, and hands with various Asian pressure point techniques. The spa offers foot massages, body massages, hot stone massages, as well as specializes in reflexology.

Fit, another store in the area is basically a Japanese version of a dollar store. Upon walking in, expect to be greeted by the warm staff yelling, “Irasshaimase!” –a way of saying “welcome” in Japanese.  The store has a little bit of everything including Japanese knick-knacks, snacks, candy, and beverages. There is even a photo booth to snap you and your party’s photo in.

Houston Chinatown is a place for great Asian food, groceries, films, and souvenirs. Driving down Bellaire Boulevard between Boone and Fondren Street, spectators will see Chinese street signs, shopping centers, businesses, and plenty of restaurants of every kind of Asian cuisine.

"The quality of the furniture was surprisingly nice. It was easy, cordial, and a pleasant experience working with Christine and her team. I will use your company in the future."
-Sarah Mark

"Thank you again for all your help. You have helped make our short stay in Kingwood virtually worry free."
- David Franklin

"You and your team are providing our company with impeccable service and professional attention."
- Goodman Mfg Company, Human Resources

"Thanks so much for your kind attention on everything. Appreciate it! - Pedro Crestani I really appreciate [CFL] taking care of [our relocating employees] so promptly. Thanks so much! "
- Afren Resources USA Inc., Office Manager

"My experience with your company has been great. I really appreciate the extra work you personally put in to modify the package to exclude dining room furniture and negotiate a better price for me to reflect that. The delivery was great; the delivery men were very polite and professional and worked efficiently to get all the furniture in my apartment and set up. I also appreciated that they cleaned the furniture off and wiped down the mirror with glass cleaner, it was a nice extra touch. I have been more than happy with my furniture and have had no problems whatsoever. Thank you for the great service you have provided!"
-Melanie Seyman

"Thank you again SO MUCH for all your help. We will certainly recommend your services to anyone in need of furniture leasing. You have always been more than accommodating."
- Hannah Stearns