Dallas Fort Worth, also referred to as the Dallas Fort Worth Metroplex, is a region in North Texas that encompasses 12 counties within the state of Texas. The area is divided into two distinct metropolitan divisions: Dallas–Plano–Irving and Fort Worth–Arlington. The area is also referred often referred to as DFW, or simply, The Metroplex. According to the U.S. Census of 2011, the Dallas–Fort Worth Metroplex has a population of over six million, making it the largest metropolitan area in the South. 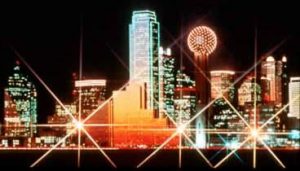 Dallas was founded in 1841 and formally incorporated as a city in February 1856. The city was first developed due to the construction of major railroad lines that exist and eventually became a hub in 1873. It was the first of its kind to be connected to Houston and other major cities along the major railroads. By the late 19th and early 20th century, Dallas was the world center of leather manufacture and harness making. Dallas makes up one-fifth of the Dallas–Fort Worth Metroplex, in which at least one quarter of all Texans live. The city has a tremendous job market and is home to over 18 major Fortune 500 companies. Some of which include: Exxon Mobil, AT&T, AMR, Kimberly-Clark, J.C. Penney, Dean Foods, Texas Instruments, Southwest Airlines, GameStop, Commercial Metals, Dr Pepper Snapple Group, and RadioShack. Many of these companies are in need of Dallas furniture rental services like our own, as they have mobile workforces visiting the area and needing temporary accommodations.

Fort Worth was established in 1849 as an Army outpost on a bluff overlooking the Trinity River. Fort Worth went from a solitary outpost to a thriving town when it became a stop along the Chisholm Trail. The trail was a path on which millions of head of cattle were driven north to market. Fort Worth became the center of the cattle drives, and later, the ranching industry. Its location on the Old Chisholm Trail helped establish Fort Worth as a trading center where it eventually earned it the nickname “Cowtown”. Like much of the South, during the 1860s Fort Worth suffered from the effects of the Civil War and Reconstruction, but eventually rebuilt to become the city that it is. Still today, Fort Worth maintains its Western heritage and traditional architecture and design.

Some annual events worth checking out in the DFW area include the State Fair of Texas, The Dallas International Film Festival, The Deep Ellum Arts Festival, and the Fort Worth Stock Show and Rodeo.

Dallas Fort Worth is an area of the country that boasts a proud heritage and has a constant influx of new and exciting people, places, and things. Museums, shopping, events, live entertainment, savory eating, western flair, historic discovery, and amusement parks, are all at your disposal. Whether you are a first-time visitor or a long-time fan of the area, you can easily spend an hour, a day, a week or more exploring and experiencing that DFW has to offer.

"The quality of the furniture was surprisingly nice. It was easy, cordial, and a pleasant experience working with Christine and her team. I will use your company in the future."
-Sarah Mark

"Thank you again for all your help. You have helped make our short stay in Kingwood virtually worry free."
- David Franklin

"You and your team are providing our company with impeccable service and professional attention."
- Goodman Mfg Company, Human Resources

"Thanks so much for your kind attention on everything. Appreciate it! - Pedro Crestani I really appreciate [CFL] taking care of [our relocating employees] so promptly. Thanks so much! "
- Afren Resources USA Inc., Office Manager

"My experience with your company has been great. I really appreciate the extra work you personally put in to modify the package to exclude dining room furniture and negotiate a better price for me to reflect that. The delivery was great; the delivery men were very polite and professional and worked efficiently to get all the furniture in my apartment and set up. I also appreciated that they cleaned the furniture off and wiped down the mirror with glass cleaner, it was a nice extra touch. I have been more than happy with my furniture and have had no problems whatsoever. Thank you for the great service you have provided!"
-Melanie Seyman

"Thank you again SO MUCH for all your help. We will certainly recommend your services to anyone in need of furniture leasing. You have always been more than accommodating."
- Hannah Stearns